Private Investigators Use Satellites for investigations

Private investigation techniques have taken an innovative turn in recent years, with evidence now being gathered via Earth observation.

We gather evidence with satellites

Private investigation techniques have taken an innovative turn in recent years, with evidence now being gathered via Earth observation. The technology uses imagery from satellites, drones and aircraft to provide evidence for investigatory service clients.

Pioneering these methods is Air Space Evidence, the world’s first space detective agency. The company was founded in 2014 and won this year’s European Earth Observation Product of the Year award. The Company’s origins lie in academic research undertaken at University College London, resulting in a blend of academic and military intelligence expertise in the legal, security and technical fields of Earth observation.

Individuals, companies like myself and governments in more than thirty countries have already made enquiries about the technology. As newly launched satellite constellations improve the regularity with which images are taken, it is expected that the use of such evidence will become more common. The company designs satellite monitoring programmes, and is currently helping governments tackle the multi-billion dollar problem of waste crime by launching a new satellite detection service called ‘Waste from Space.’

As part of this service, Air Space Evidence has created a semi-automated model which can identify unlawful waste landfill sites, enabling successful early regulatory interventions, allowing Governments to catch criminals in the act and to drastically reduce costs and environmental hazards. Over the past 12 months, four key areas have emerged as having the potential to benefit from evidence provided by Earth imagery. 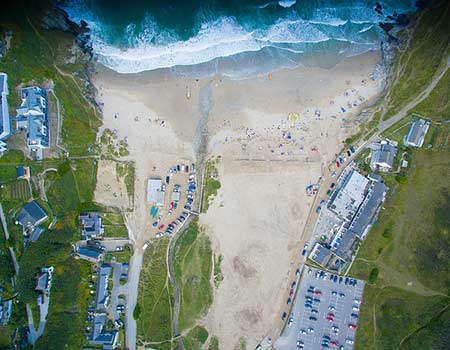 For example, in one instance reported by Air Space Evidence, the company was able to find imagery of the suspect’s house at the exact date and time of the murder, so his alibi could be checked.

Another interesting case concerned a large high-value vehicle, which had been stolen. When it turned up at auction the people selling it claimed they had only purchased it recently. Satellite imagery of their property was used to demonstrate that there was a very similar vehicle on their land between the time that the vehicle was stolen, and the time they claimed to have purchased the vehicle – and incidentally probably uncovered a large unlawful landfill close by.

Environmental cases have included identifying illegal deforestation in Fiji, and examining changes to a shoreline of a lake following dredging, in the United Kingdom. There is also potential to investigate illegal waste sites.

Air Space Evidence reports working on a number of boundary dispute cases and enquiries about the dates when changes in size to a building actually occurred (i.e. changes to the footprint of a building over time). Many of these cases had successful outcomes – in one case, the client making the complaint dropped their action when they realised they were wrong, saving themselves a lot more legal costs.

Due to the uniqueness of the technology, a number of curious cases have arises, seeking to utilise Earth imagery.

In one enquiry, the request was to examine the whole of the Giza Plateau in Egypt because the client wanted to prove that there were “millions of enormous hidden proto Hebrew letters” written there.

A further enquiry related to the client wanting to provide proof of aliens coming and going from a U.S. property.

This article was originally sourced from Air Space Evidence 2017 Newsletter