In 1973 Keith joined World Association of Detectives (W.A.D.) and then commenced to work Internationally as private investigator, he became well known for his involvement in child recovery cases. Often these cases were the result of a breakup within an inter-racial marriage, where a child/children were taken out of the country by a non custodial parent and without the consent of the other parent. Keith has risked his life on many occasions, venturing into various countries to set up stings, or under some subterfuge to locate the relevant children for retrieval.

Some of the international countries that were entered for surveillance and retrieval were Japan, Korea, Thailand, Fiji, Singapore, Philippines, Poland (3 cases), Lithuania, Germany, Malaysia, Malta, Canada, Turkey, Greece, Mexico, Cyprus and Yemen. The Yemen case was the most daring, where Keith was initially put in jail and then deported after one week. Beyond all odds, Keith obtained different documentation and went back into Yemen undetected and stayed for four weeks to work on the case

In 1969 a move back into the Investigative area was made and together with an ex QLD State Police Officer (who Keith bought out in 1975), this Private Investigation business was established in Brisbane, the home town of Keith. The business was initially named Allied Investigation Services and after a few name changes became known as International Detection Services (I.D.S.) in about 1980.

Keith would assess every case and accepted only about three out of five cases referred to him. He always wanted to make sure that morally he was doing the right thing for the children involved. He is still a hero to many of the children who remain in contact with him. In 1990 and again in 1992 Keith campaigned/ran for a seat in the Australian Parliament but came second both times (no prizes for second place).

I.D.S. became the most high profile private investigation business in Australia in the latter 1990s and early 2000s. It was in 2004 that Keith decided to sell the business to a current employee Nick Wright and his partner Peter Harkin (ex State Police Officer). The business continues to grow and expand under this new ownership and has become known as one of the leading agencies in Australia. Keith continues to be a consulting Investigator and still accepts cases for a number of international clients.

Keith started his investigative career when he joined the Royal Australian Air Force in December 1961.

His service career was for a six year enlistment during which time he was a member of the Service Police and other intelligence areas.

Today, Keith is the private investigator with the longest history in Australia (47 years). 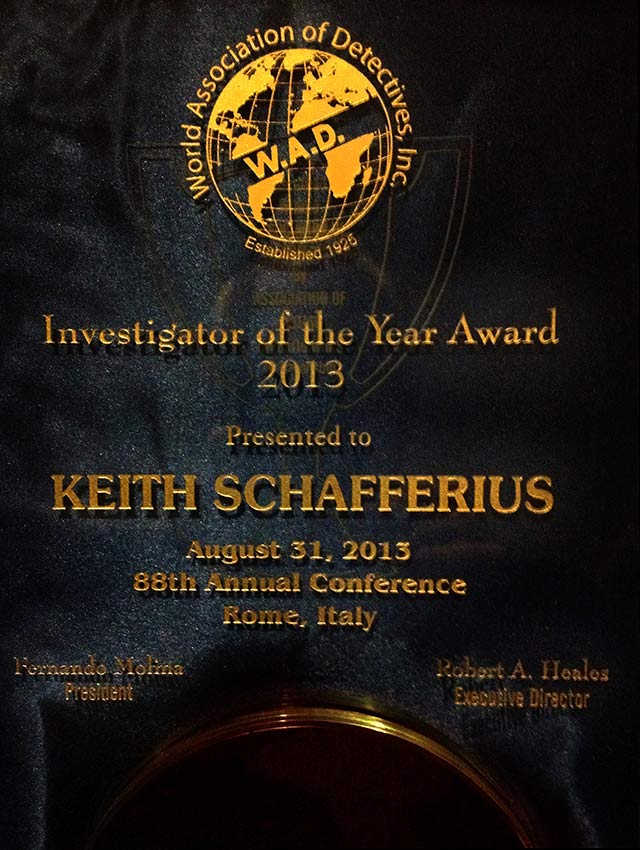 Member of The Association Of British Investigators 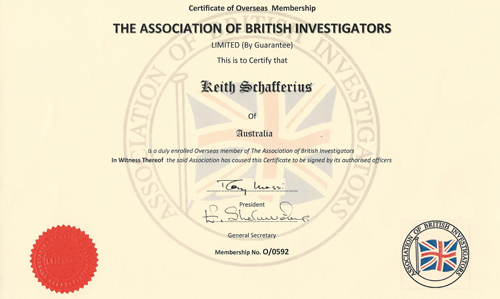 Keith is now operating in Brisbane and considers his choice as private investigator, or private detective as it is sometime called by people, to be his greatest decision. Being able to investigate and gather information not readily available for most people has become his life and passion.

If you want to deal with real professional, Keith’s services are the best you can find. He cares about you and your case which will be handled with care and be dealt with in strict confidentiality.

His success and cases has been mentioned numerous times in all kind of media as far back as the 1970’s to international TV appearances in 2014. To view many of the stories around his work life, click on private investigation media archive.

An important part for his clients is to understand and trust him with private investigators services. His lifetime membership with international investigation organisations is a great testament to his outstanding and professional accomplishments. See my World Association Of Detectives Profile Page.

The way Keith works is by using his unrivaled experience to gather information, analyse, build strategies and implement tactics to fulfill the investigation process. There are many ways to get the information you need and each case has its own unique details.

When hiring his private investigation company’s services, you can be confident that you have hired the best private detective.

Our services are trusted by thousands

We are very proud when our clients write a review for us. Read testimonials from some of my past clients.

Take a dive into many interesting stories.

I have been an investigator virtually all my life – the first indication was when I was six years old,

This is a big deal; a significant international recognition for a lifetime’s work. If you’re unfamiliar with Wikipedia, it’s a

Cybercriminals are taking advantage of innocent people made even more vulnerable under the weight of lockdown restrictions.